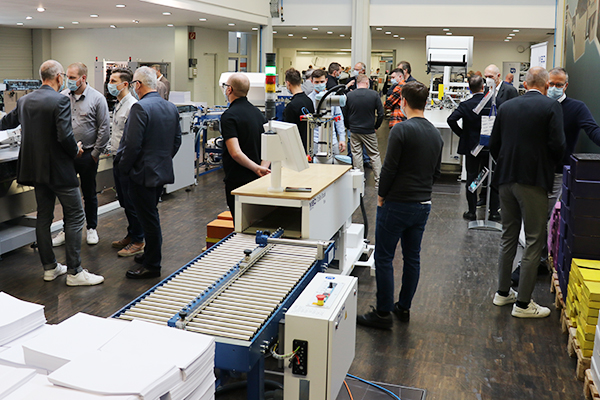 Many machine innovations to the end of the year


Doors open for innovations under the turquoise flag! The Postpress Alliance called, and they came. Alliance Days 2022, this year's fall event of the Postpress Alliance partners BOGRAMA, H+H, Hohner, MBO and Wohlenberg at Hohner Maschinenbau GmbH's headquarters in Tuttlingen, Germany, attracted many visitors, dealers and customers alike, as expected thanks to an attractive exhibition program.


During the days from November 7-11, Hohner's Postpress Center was transformed into a veritable showroom for innovations in the finishing areas of die-cutting, pharmaceutical folding, wire stitching, digital processing, folding and robotics, including networking possibilities. Starting with a full day of dealer training on November 7, the sales teams were well prepared when the doors opened to public on the 8th.


Swiss Postpress Alliance Partner BOGRAMA presented the newly developed STA 550 BK stack delivery combined with the proven BSR 550 Servo rotary die cutter, with great feedback. The result was original round coasters punched out in multiple-up, stacked inline and laid out. The fact that the new STA 550 BK stack delivery can perfectly handle the counted stacking of small-format labels, business cards and cards of all types, whether rectangular, square, round or contour-punched, has been particularly well received. With up to nine ups, as individual products or in a shingled stream, a format range from 50 x 60 mm to 230 x 230 mm and a maximum stacking height of 150 mm, there is a wide range of possibilities. Last but not least, visitors also rated the adjustable extension height of the pile table to match the pile height and the simplified job changeover by replacing the block with the pile chutes as a beneficial development in favor of efficiency savings. Although not shown at Alliance Days 2022, Bograma's sales team explained that the STA 550 BK also features an interface for connection to a banding or packaging machine, and a robotic solution is also possible, as well as a simple removal by hand.


Partner H+H, like MBO part of the KOMORI Group, is not considered without reason as an expert in pharmaceutical folding. A strong brand that repeatedly scores with new developments, this time with the M9 for the production of package inserts for a wide range of industries such as the pharmaceutical, cosmetics, food or agricultural industries, and was also able to win over many interested parties during the exhibition days.


The further developed MBO stacking robot CoBo-Stack flex had already attracted attention in the weeks before the event with an impressive new movie and was also a real attention getter during the event with its colorful cardboard boxes and the robotic arm always in motion. Robots are one of the central topics in times of a shortage of skilled workers. The ability to handle different stack heights is certainly an innovation of the proven CoBo-Stack that enjoys great approval.


Right next to it, visitors were finally able to see live the versatility of Hohner's HHS FUTURA. Two machine configurations at the same time illustrated the many possibilities for feeding both sheets and rolls. Visually impressed by the miniature components produced in 3D printing in the colors of the now well-known FUTURA advertising campaign, customers had the opportunity to put together their own machine configuration. Whether collating via towers, cross-fold with the K70 from MBO or via the classic saddle stitcher with four feeder types: roll fed with the MBO unwinder UW23 with data matrix code for personalized content, a SVC525C sheeter and the DFT560/4 folding unit (all three MBO), as well as creasing unit or digitally processing via the MBO T50 buckle plate folder from the flat pile feeder. By far the most compact DIGI finisher configuration, however, is the ultimate market launch: Hohner's horizontal compact digital feeder (KDAL), which, thanks to its loading from above and a taking from below, also offers the enormous advantage of production without interruptions for filling. Individuality of print products is easier than ever with the FUTURA concept and makes print finishing flexible and adaptive to new trends in the long term.


Wohlenberg has shown on-the-ground presence with an information stand. Machines for customer orders currently obviously have top priority, so an exhibit of machinery was unfortunately not possible during the event. Nevertheless, the company answered the customer’s questions with its usual competence and dedicated itself to new projects and solutions.


Accompanied by visitors from the trade press and a Postpress Alliance film team, the days in Tuttlingen between the Postpress Center and the hospitality area in Hohner's Orangerie with appropriate catering flew by.


During these days in Tuttlingen the well-known and familiar Hohner Orange merged with the well-established turquoise of the Postpress Alliance, the strong partnership that puts all efforts on added value for customers in postpress.


Satisfied faces and positive feedback from customers and dealers alike also made for fulfilled faces among exhibitors and organizers, who rated the exhibition as a thoroughly successful event for the year-end spurt.


As always, at the end it is almost a little sad when the exhibition is over but one thing is certain: Alliance Days 2023 will come sooner than you think. Until then, the members of the Postpress Alliance can be reached on their individual channels, but also on the joint virtual platform of the Postpress World. Why not visit us there? www.postpressalliance.com